It's a God Thing 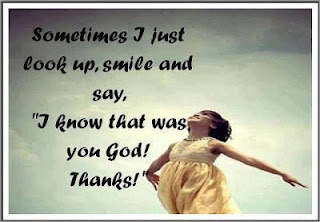 With so many people sick right now, I thought a blog post on one of the many times God has been there for me during an illness would be appropriate.  It confirms the three characteristics that He alone has... all-knowing, all powerful, and ever-present.
When I was married, we lived in an apartment in Naperville, IL during 1994-95.  Sometime during that winter I got the stomach flu.  I've never had a case of it so bad and hope to never again.  I was home alone and went to our second bathroom off the kitchen.  I was sitting on the commode with my head on the vanity and feeling pretty awful.  Without knowing it, I passed out.  When I came to, everything looked strange and I didn't know where I was at.  I soon realized I was upside down in the bathtub and looking up at the under side of the tub's spout.  My shoe was caught on the corner of the vanity and I was still on the toilet.  Yes, both an uncomfortable and panic moment.  I can't remember exactly, but I think I wiggled my foot loose to get unstuck.  I'm still in the bathtub on my head.  My 'its a God thing' moment was that I used the shower curtain and rod to pull myself up and out of there.  We all know how flimsy those are so I know He gave both me and the curtain strength at the needed time.  I can also say 'its a God thing' that I didn't bust my head open during the fall.  After all this, I made it to the phone and Marc came home.  We spent the next few days suffering the virus together.
We will suffer through sickness in this world but we are never alone.  He is there, He knows, and He provides the strength needed to get thru it.
Posted by Angelia at 1:37 PM 5 comments: