I do not like change. Well, at least if its not my idea or expected. I do like to redecorate my room with the seasons. Other than that, I like things to stay the same.
My first semester in college at UCA, I lived in the dorm. My assigned roomate and I had little to nothing in common but I tried to make the best of it. Her middle name must have been 'change.' I went home one weekend to come back to find the whole room rearranged, including my stuff. I didn't object because it was okay with me, except it was a little hard relocating my stuff. Well, it soon became NOT okay when every time I went away for the weekend this happened. I never knew a tiny room could have so many different arrangements. The final straw came when my bed was by the door, the two tall closets between us and her bed by the window. NO WAY. The room was put back to its almost original state and remained so.
Its okay to try to be flexib;e with one another, but don't let yourself be bullied or taken advantage of. Speak up for yourself.
Posted by Angelia at 2:12 PM 3 comments: 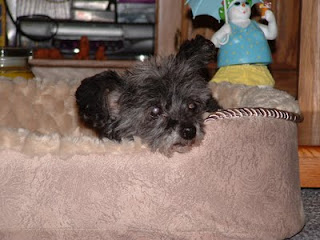 I was making photo cds for my mom yesterday to take to California today. I came across one of my favorite pictures of Girlfriend. This is how I like to remember her.
Posted by Angelia at 12:22 PM 4 comments: