Well if you were one of the many people who prayed for me last night, then I am here to tell you that your prayer was answered.  I had no cough all night and enjoyed the concert to the fullest.  We had great seats and saw other friends there as well.
The pre-concert opened up with various music from a DJ to get the crowd pumped up.  Then the concert opened and ended with the song, 'God's Great Dance Floor'.  Karla and I lost our timidness by the end.  She danced and I did my 3 spins.  The show wasn't all fast, rock music.  Chris sang 'Nothing but the Blood of Jesus', 'Amazing Grace' and some other slower songs.  He has a song called 'White Flag' about how God's love has come to win our battle against sin and we raise our white flag to surrender it all to Him. So the people in the crowd who had bought tshirts were given a white flag and were asked to wave them during the song.  Well we hadn't bought our tshirts yet so we broke out our Kleenex's and waved those...haha.  He sang another song called 'I Will Rise' about us rising up on eagle's wings to Heaven when he calls our name Home and how there will be no more sorrow, no more pain.  The audience was asked to shine a light of any kind during the song.  Linda was prepared with her flashlight and shined it brightly.  Chris sang 'In This City' and stated how much more is to come and be done for the Lord in Little Rock and Arkansas.  He sang more songs than I can mention but it was almost a 3 hour show of praise and worship.
Included in the show was a 30 minute message by Louie Giglio.  He talked about 'The Prodigal Son' parable.  He asked 'do you know what prodigal means?'  I always thought it meant 'lost' but that's wrong.  It means 'lavish'.  The father in the story, as our Father in heaven, wants to lavishly welcome his child back when he willfully returns to him.  This was a message to both unbelievers and those who had lost their first love of God to worldliness.
If you ever have the opportunity to see a Chris Tomlin concert, I encourage you to go.  This was my second chance to go and I was more than pleased with both. 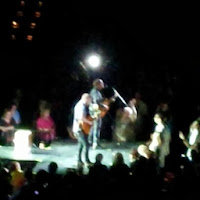 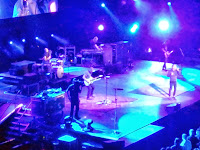 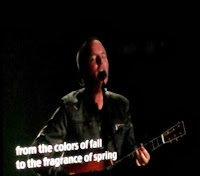 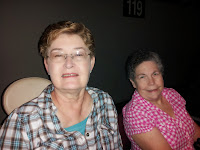 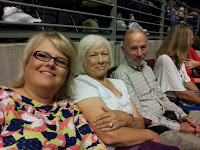 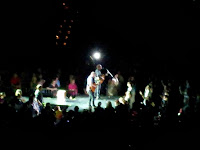