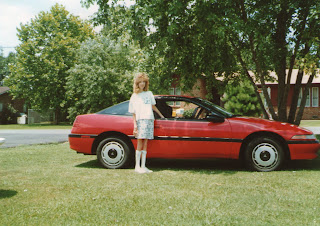 My first car was a white Dodge K-car.  My second was a red Honda Prelude that I loved. It developed a water leak in the back window.  So here in this picture is my 3rd car, my red Mitsubishi Eclipse.
Most of my 'car' stories happened with the Prelude but I do have one funny story in this car.  I was attending UCA at the time and it was the last day before spring break.  I was going from the parking lot behind the science building to the street that was diagonally across.  Well I didn't pull onto the street, stop, and turn left.  No, I just tried to dart across.  I didn't see that other little red car coming down the street.  WHAM!  Yes, it was my fault but I don't believe the other driver's injury claim when she got out of her car first to check on me.  Well my car was towed away and we both seemed fine.  When I got back to my rented room, I called my parents.  No answer, so I left a message saying I'd been in a wreck.  I called over and over till my dad finally called that night.  I said 'where have you been? didn't you get my message?'  It happened to be April 1st and he said 'yea, haha, April fools joke.'  I said, 'it's no joke. the wrecker took my car to some body shop.'  I wish I could say the story ends there, lol, but it doesn't.  While my car was being fixed, I borrowed my parent's Nissan Maxima.  The first day back from spring break, in the same parking lot, this guy backed out of his parking space right into me.  Okay, this wasn't my fault this time.  Not too much damage but still it was a bad driving week for me.
Accidents are going to happen so when you get that call, just be thankful first that they're ok.
Posted by Angelia at 3:21 PM 3 comments: