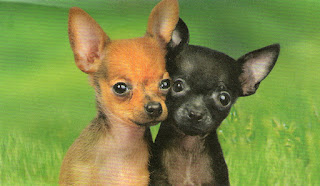 ﻿     I love this picture.  My friend, Betsy, gave me a puppy calendar for Christmas and this is one of the  pictures from it.  Friends are so valuable in our lives.  They will listen to our never-ending, sad, pitiful me stories that no one else wants to hear.  They will tag along with you for no reason just so you don't have to go somewhere alone.  They will bring you your favorite snack when you're too sick to go out and get it yourself.  They will pray for you whether you're on a hill or in a valley in your life.  They will know if you say you are 'Fine!', that there's often more to the story.  They will know what you're saying across a room with just a glance of the eyes.
King Solomon had written about the value of friends as well. In Ecclesiastes we read, “Two are better than one, because they have a good reward for their labor. For if they fall, one will lift up his companion. But woe to him who is alone when he falls, for he has no one to help him up” (4:9-10).
Friends are like family, I can't live without them.  We become to look alike too, don't you think?
Posted by Angelia at 12:38 PM 3 comments: 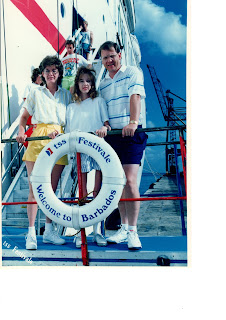 In 1989, we went on a 7 day Carribean cruise.  I think we flew to Puerto Rico and caught the ship there. It could have been one of the stops but I don't remember anything there but the airport.  It's been a few years so my memory is a little faded.
We went to several islands but I'll start with Barbados.  We went to Bluebeard's Castle.  I think it was on the beach here that a suspicious guy came up to us trying to sell jewelry.  We suspected he had drugs in the lower drawer of his jewelry box.  We did buy a conch shell somewhere on the island.  Good grief, it stunk in a few days. The lil animal inside had died. yuck.
Martinique was another island.  I liked the shops here. They looked like storybook shops. French influence I suspect.  Sunbathing here can be a lil shocking.  The women go topless here..yes you read that right..on public beaches. I think this is the same island that our bus tour stopped at a nude beach.  We didn't get off the bus.  We saw more than we wanted from there, lol.
St. Thomas was the most American of all the islands.  We tried to take a taxi or bus tour on each island to see the 'sites' in the few hours you're given by the ship to be on shore.  We took a bus tour here.  The driver got us up close to the iguanas in the trees as he dared to get as close to the edge of the cliff as possible.Eating, shopping and beach lounging were our main activities.
St. Marteen was another island.  We went to this beach and needed some shade.  We found this tree and couldn't believe no one was under it.  Well, some people soon told us, it was a poisonous tree that dripped sap.
The cruise ship itself was nice but the room was the size of a matchbox with bunk beds.  This picture of me was from one of the dress up dinner nights. It was fun and I may have gotten the islands mixed up but that's about all I remember because it was way back when.
Posted by Angelia at 11:26 AM 3 comments: