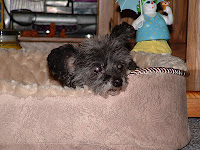 Last night on the news, they had a segment on whether your dog would really react and protect your property against a burglar.  The conclusion was that most family dogs don't have the fighting disposition but that their bark is usually enough to scare off a prowler.
This reminded me of the time we took Girlfriend to see my grandmother at the nursing home. The door to her room was shut as we were visiting and there was a knock at the door. Girlfriend barked, pretty loud I must say..lol.  We opened the door and no one was there?  When we started to leave, an aide said someone had told her we had a big dog. She said 'where is it?'  We pointed to 5 pound Girlfriend in my dad's arms.  ''That's the big dog?''  She laughed and said well she sure scared the other aide.
Another time David and I took Girlfriend to see his mother in the nursing home. David told Girlfriend she had to be quiet before we went in.  While we were there, she needed to go out.  She made the softest, lil bark you've ever heard. We thought it was pretty cute.
We can learn a lesson from Girlfriend. There's a time to bark loud and a time to bark soft.  Our bark is controllable, if we want to.
Posted by Angelia at 12:51 PM 4 comments: