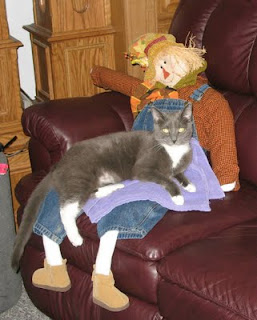 This is Georgie. I had her from 2001-2008. I lived in Walnut Grove, MO and had a cocker spaniel, Brandi, at the time. We had never had any strays come to the house until this one two week period in late July. A stray dog came first and Brandi ran it off. About a week later, a little kitten came. Brandi didnt seem to mind it at all. The kitten would even walk under Brandi's belly. The kitten ran in the house a couple of times and ate the dog food. I was trying not to get attached because I was moving home soon. About two weeks later, Brandi passed away unexpectantly during surgery. After that, I took the kitten in and made her mine.
I believe God gives us what we need in just the right timing. It comforted me to know Brandi approved of her. She was definetely a blessing.