Fishin' in the Dark 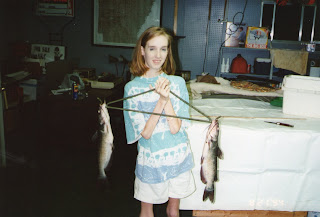 This picture is from 1994 sometime in the summer.
I've been fishing since I can remember from Lake Conway to many of the other lakes in Arkansas to the Atlantic Ocean off of Maine.  I've always enjoyed the sport, more than the food caught.
My dad and I often went down to his cousin Chuck's place in Scott down on the Old River.  He has a boat house so you can sleep between yoyo runs at night. Catfishing at night is a process in which you hang up yoyos on tree limbs with bait and then later you go spotlighting to see if you caught anything.  Well my job was to drive the boat up to the yoyo and my dad would get the fish off.  In the dark of night, snakes are something to be on guard for.  They aren't easy to see either. One night as we were driving towards a yoyo, we spotted a snake right on the limb of the yoyo. I turned that boat around faster than you can say lickety-split. My dad saw his dad get bitten twice by a snake in his lifetime but I wasn't going to repeat that family history.  We had alot of fun catching catfish at night by yoyos or trotline.
Posted by Angelia at 12:59 PM 3 comments: