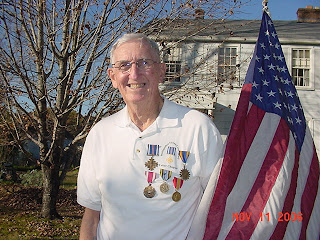 Yesterday was Veterans Day but it is recognized again today in government offices.  I wanted to give a salute to one of my favorite veterans, Pascal ''Bud'' Hancock, with a blog post on his service duty.  Bud has not only served in the military field but also in the missionary field.
Bud was born on Dec 30, 1930.  He became a believer at 12, but not strong.  After marriage and beginning AF assignments, he began to see the need for a more Godly life. He learned to fly while in college, but after graduation and joining the Air Force, he was selected to train as a Navigator because of his test scores. From the beginning of his career he flew several kinds of aircraft- all  cargo, troop carriers, humanitarian ferrying missions.
In 1967 he got a Vietnam assignment at the peak of the war. He moved his family of 5 from Iowa where he was teaching in college for the AF, back to home in Tenn -"just in case".   Praise the Lord that he came back after 13.5 long months.
Flying in Vietnam was not as dangerous as for on the ground troops, but once a plane was shot down, there were usually no survivors or they were captured.  He began to really trust in the Lord for every minute. carrying and unloading US troops while under fire -both ground and air attack;  and the terrible task of carrying out the wounded and dead. Moving refugee civilians to more safe areas.  Supplying needed supplies and food , etc. The bases in Vietnam were never safe, snipers were all around.
The workhorse C-130 plane he was flying in Jan 1968 in Southern Vietnam was hit near the Cambodian border.  His crew was unloading huge "bladders" of gasoline and VietCong snipers were all around the runway in the trees.   Soon his plane was gushing its own gas supply from bullet holes to the point of not being able to take off again.  Bud saw this and dashed from the plane into the woods, cut a green stick from a small tree and dashed back. Under extreme ground fire, he climbed onto something and whittled that stick into a plug that stopped the bullet-hole leak in the engine gas tank temporarily and gave the pilot time to get the plane air born  and back to a safer base. God used that small act to save the crew of 9 and a multi-million dollar airplane. The US military recognized his act of bravery with a Distinguised Flying Cross (DFC) award.
After returning from that Vietnam assignment, the next mission was Germany where he flew the same types of planes, but these planes were converted into "spy planes" for flying over to Berlin and back, taking continuous photos of Russian activity.  Another very dangerous activity (completely unknown to his family!)  Again God was good. The navigator had the huge responsibility of keeping the plane within the UN restricted air corridors and a 10 feet deviation could mean being shot down.   They called themselves the ''Berlin for lunch Bunch''  For 5 years he flew this and other routes daily,   under this pressure. This airplane crew was sworn to secrecy for 10 years,---- he has only recently revealed his "job" in Germany to his family!
His family grew to 7 by now, and the Lord had smiled upon him because Bud now knew his wife and 4 oldest children had accepted Christ also.
These were 2 of Bud's AF career assignments.    His best job has been being a daddy and a husband, which he has excelled at.  After he retired from the AF, he taught some college courses, sold real estate until his children were established in college etc, then God allowed him to follow his leading to be a part time missionary to many countries and touch many lives, and be impacted with the love of so many for almost 27 years.
''Every job is a Christian job for a Christian.''  May Bud's life be an example to all in times of uncertainty and the verification of God's faithfulness.
Posted by Angelia at 1:30 PM 6 comments: