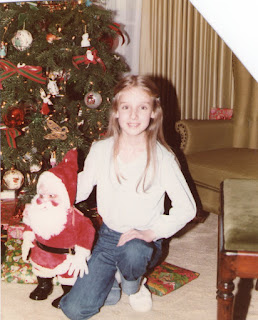 This is a picture of me at Christmas but the fact that I'm kneeling leads me to my story.  When I was in 7th and 8th grade I played the flute in band.  I think 7th grade was just a chance to try something new but 8th grade was a challenge all together.  I don't think I realized when I signed up that 8th grade was a marching band for football games. I can tell you everything was a stress and struggle for me; climbing the bleachers, the marching practice, the bus for away games and not to even mention actually playing the flute.  I'm not a quitter and I so wanted to be just like all the other kids.  Well then came the formation practice out on the football field and at one point, we had to kneel on our left knee.  The goal is to look uniform throughout the band but I couldn't kneel on my left knee, just my right knee.  So I had to be the odd man out and be different.  As I think about it now, I don't know why the band teacher couldn't have switched the chosen knee to be on?  I thought everyone in the bleachers would think I messed up.  Although that was a concern of mine, I was more focused on just getting back up while holding the flute in position.  Yes, my brain was flooded with what the world thought of me.
So there are two lessons I want to point out from this story.  First, it's okay to be different than the world around you.  As Christians, we are called to not conform to this world but to be transformed like Christ.  My pride was really the only thing that was hurt in being the odd man out.  Pride is often what holds people back for standing up for what's right in a crowd.  Secondly, the world will not stop or change for you.  We need to  remember the world does not revolve around us but that's no excuse to quit.  We must press on and adapt as necessary.